Soulfly Does Nailbomb at The Forge

Tonight I went to see Soulfly play the Nailbomb record "Point Blank" in its entirety - openers were Lodi Kong, Noisem, and Cannabis Corpse. I've been to so many shows over the years but not a lot of metal shows actually. I've always loved fast, heavy music and Nailbomb is something I would have loved twenty years ago. The show was really good, they pulled off the set well and the openers were awesome too.

We got to The Forge a bit early because we wanted to eat before the music started, which sort of worked out. We had tickets for the upstairs balcony but went downstairs to find a server to order and whatnot. We were told we would be served upstairs, which was pretty rad, and just then Lodi Kong began to play.

I didn't check them out beore the show, but they had a good set. A nice blend of fast, thrashy tunes and sludgy metal riffs - with great vocals that I recognize from a few Soulflly tunes. I found myself enjoying several of their songs and their set went by fast (versus when you're sitting through a lame opener, you know.) Next was Noisem, who I'd never even heard of but they were pretty furious. Almost every song was super fast and thrashy, almost grindcorey even, but they had some nice slow jams mixed in too. It was a very enjoyable set, I look forward to hearing more of these bands.

Cannabis Corpse, at first, might seem like a "joke" band - even their song names are clever puns on other metal tunes. But this is not only one of the tightest metal bands I've heard (yes they sound like Cannibal Corpse..), their live show was totally awesome. The band as a whole was super tight, but the drummer was jaw-dropping in his technical precision and sound. I enjoyed the chatter out of the singer, who had a great stage presense and sense of humor. Introducing a song, he asks: "Who here smokes weed once a day? How about a hundred times a day? This song is for those who smoke for - (raises his hands in a "metal" way) All Eternity!!!! (said in a growly metal voice, of course.) Not only was that a great song, but the intro was hilarious and definitely made me smile. This was all topped off when someone wearing a "nug" costume jumped on stage with an inflatable doobie while they played their final song. Cannabis Corpse kicks ass, I will definitely go out of my way to see them again!

It was about 10:00PM by the time the stage appeared to be set for Soulfly, and we waited for a few more minutes before I saw Marc Rizzo hop on the stage and walk behind an amp, grabbing his guitar to do something. That means they will play soon! Indeed, a few minutes later the stage guy flashes his mini flashlight at the sound guy, and the house lights faded. Max Cavalera and company walk out to the intro to "Wasting Away", and the band begins to play. I fucking love this song, and it was awesome to see it performed live and done so well. One after the other they went through each song on the album, I probably should have mentioned sooner that we were on the balcony in the center - pretty much the best view in the whole place if you ask me. 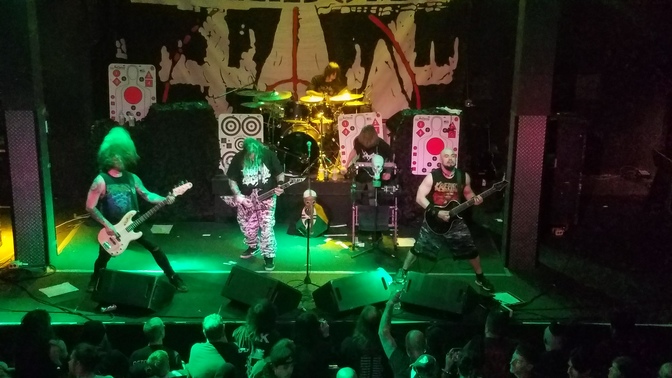 Seeing bands live always makes me feel inspired to play live myself, or even just have a mini "concert" in my basement by myself. Seeing metal legends like Max Cavalera and Marc Rizzo with Soulfy definitely fills me with that feeling. Well I guess that's about it, I just wanted to write about this show while it was still fresh on my mind. I'll add some photos later when I get a chance to resize them, but until next time -- cya in the pit!