Taking A Chance On A Cheap Guitar

I've recently taken the plunge on what some may consider a "cheap" guitar since it's obviously a knockoff of a very well known and much more expensive model. It's been a very interesting, mixed experience and I thought I'd take some time to write about it. Read on for my review of the Harley Benton SC-Custom Plus!

Ever since I started playing guitar over 20 years ago I've loved Gibson's instruments. In particular, the SG and Les Paul models were just beautiful and also very unattainable with a very high price tag. Definitely out of reach for a teenager that washes dishes and sets up carnival rides for income.

Fast forward to a few weeks ago: I'm discussing guitars with some friends and the topic of clones and cheap guitars comes up. It turns out, unbenknownst to me, there's a small industry of selling guitars that are essentially cheaper clones of famous models. After some discussion, I come across the Harley Benton website and am kind of blown away by what I'm seeing. A very wide selection of models that very closely resemble popular name brands, at a fraction of the cost. It's too good to be true, right?

I could probably afford a Gibson at sticker price now, but after doing a bit of research I had some strong doubts about their build quality. A mentor of mine once told me a story about his visit to the Gibson factory where he witnessed a room filled with discarded, defective builds. "These aren't good enough to be Gibsons", they told him. 1

But if you do some research, it seems that their quality has indeed declined. Combine the anecdotes of strangers on the internet with the anecdote of a friend: after purchasing a Gibson Explorer, the fret board was in bad shape. So much that it needed a full setup and some of the frets shaved. For the price of admission, I'd expect to not have problems like this... 2

I want to clarify that I'm not trashing Gibson. I still like their instruments, but at the end of the day I need an instrument that feels and plays well. The name on the headstock doesn't matter.

Long story short: I grabbed the ocean blue variant of the Harley Benton SC-Custom Plus model (hereto referred to as "the HB"). I think it's clear that this guitar was meant to replicate the Les Paul look and feel, and at a fraction of the price I figured it was worth taking a chance on. It probably isn't actually cheap since it cost several hundred US dollars, but it is compared to the brand it's knocking off. 3

The website I ordered from gave a shipping ETA of up to six weeks, so I wasn't expecting anything anytime soon. Thus my surprise when the guitar arrived in under a week, from Germany! I unboxed the guitar and quickly put a strap on and started playing (despite the fact that it had some low quality strings that are smaller than what I play with). It felt so nice, and even sounded good through my Orange Micro Dark despite the weak strings.

It's a very pretty instrument, and feels about like what you'd expect a real Les Paul would. I've actually only ever played the "smart wood" Les Paul and not a standard one, so I can't directly compare, but the HB felt great. I'm not used to a single-cut instrument, and the feel is wonderful and distinct. It's a different kind of experience compared to my other guitars.

I took off the stock strings and gave the fretboard a polishing, and then went to install some fresh strings. As it turns out, the (locking!) tuning peg for the third string was broken. The lock simply wouldn't tighten. I took apart the machine head as best as I could, but there was nothing visually wrong. Right out of the box, this thing was busted and I couldn't play it.

I got a set of Grover "mini" locking tuners and installed them, and the guitar was finally playable! This was my first real experience with locking tuning heads, and while I was very skeptical about them I must admit that they seem to work very well. I really enjoyed jamming on it for about a week, until more problems surfaced... 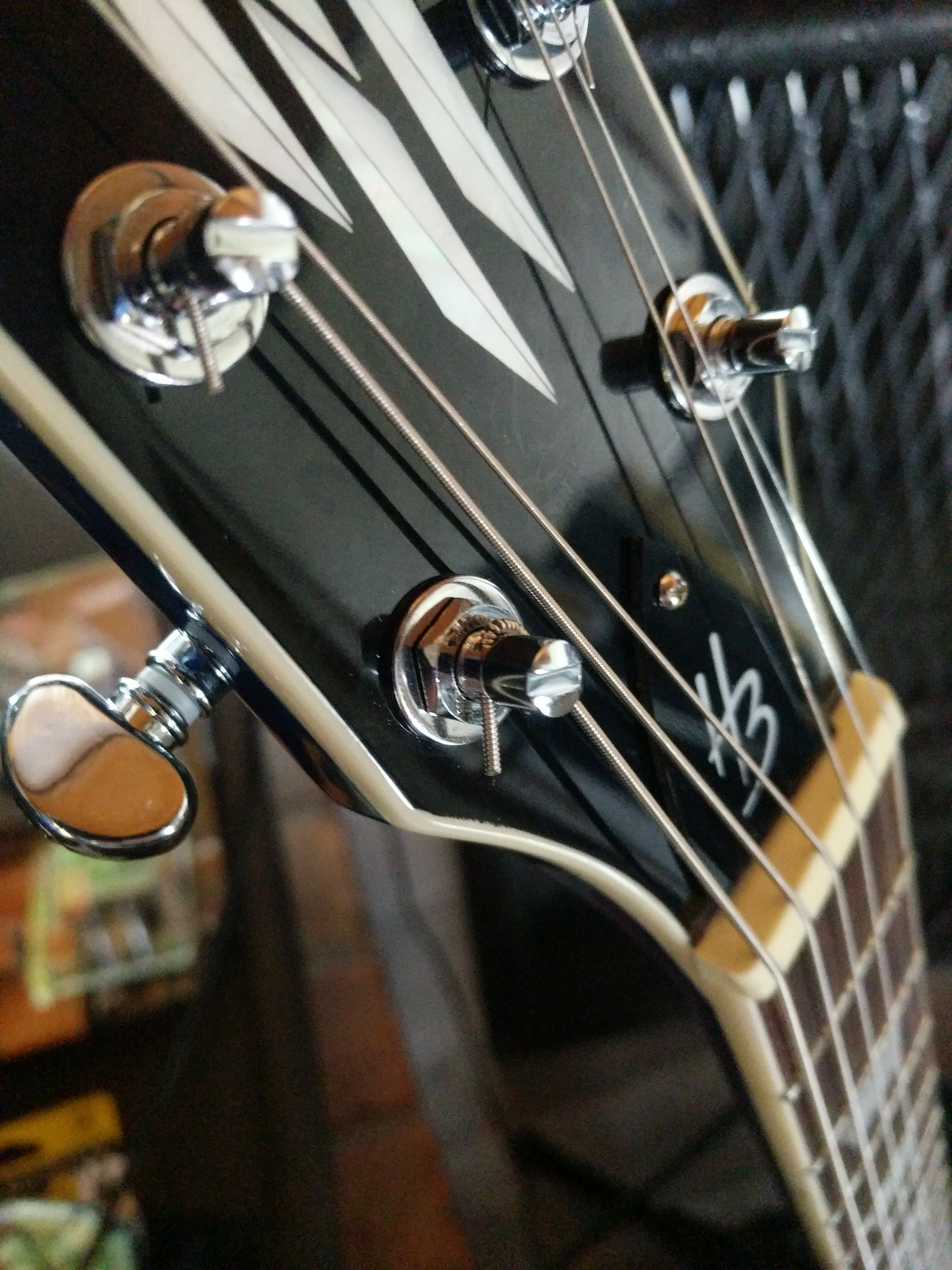 I prefer to install strap locks on all of my guitars, not because I'm going to spin them around or anything like that, but because I've had guitars fall out of a strap before and it's a really bad experience for various reasons. I use a Dunlop strap lock that's rather unintrusive; you just pop the strap into the lock and it clicks. I give it a light tug to make sure it's in, and then it's in no question about it.

Since I'd been playing the HB for a few days and was getting to like it more and more, I decided to install a strap lock and make it more formal. Unfortunately, after installing them I found the screw on the bottom pin coming loose. This problem isn't unique to this guitar; all three Ibanez I've bought had this issue as well. But the wood is effectively stripped, and the screw doesn't stay in place.

Now we're up to two issues, but as I said this isn't really a new one for me, so it bugged me much less. What's next didn't reveal itself right away.

I started playing the HB quite a bit more, especially in lower tunings. Those active pickups just sounded so great for metal, it was a daily routine now! But suddenly while jamming to "Deliverance" by Gojira, my sound cut out. Did the battery die? I decided to wait on replacing that and instead proceeded to: flip the toggle switch a couple times, mess with the volume knobs, then the toggle a bit more again, and suddenly sound was back. Huh?! 4

For whatever reason, the internal electronics were malfunctioning in a new and very frustrating way. I'd plug in the guitar, my amp would heat up, and I'd get no sound. After repating the frantic ritual described above, it'd become playable again... But what's going on? I fancy myself a bit of a tinkerer, but for now this kind of repair is out of my wheelhouse. What started as a seemingly isolated issue became an issue every time I plugged the guitar in. It's not unplayable, but I now have to mess with it every time to get it to make sound as expected.

I definitely expected some jank with the HB, and I think despite the issues I've faced thus far it was a worthy purchase. But I will say: I'm less tempted to go with some other Harley Benton clone models. The idea of having to do shotgun repairs on a guitar as soon as I open the box, even if it's a cheap one, isn't one that I love. I really wanted to grab one of the SG clones, but I think for now I'll hold off.. 5

As of this writing I've got the HB in my luthier's hands for a setup and to handle repairs for the two problems I didn't fix myself. I'd buy this guitar again if I had to redo it, but like I said I'm a bit more cautious about trying more of their instruments. If this was more of a pedigreed guitar, I almost certainly would have sent it back for an exchange or a refund. The relative cheap price of the HB has me relatively OK with doing some repairs, because overall it is a solid instrument. 6

1 This mentor is the man who taught me a special technique for stringing guitars. With this technique, strings hold a tune much longer and in general last longer than the normal string job I see most folks do. Props to Brent Peterson, I'm eternally thankful that you had the patience with me to teach me the way!

2 Gibson Explorers start at approximately $1900 (as of this writing).

3 Gibson Les Pauls start at approximately $1600 (as of this writing).

6 Shout out to Marshall!